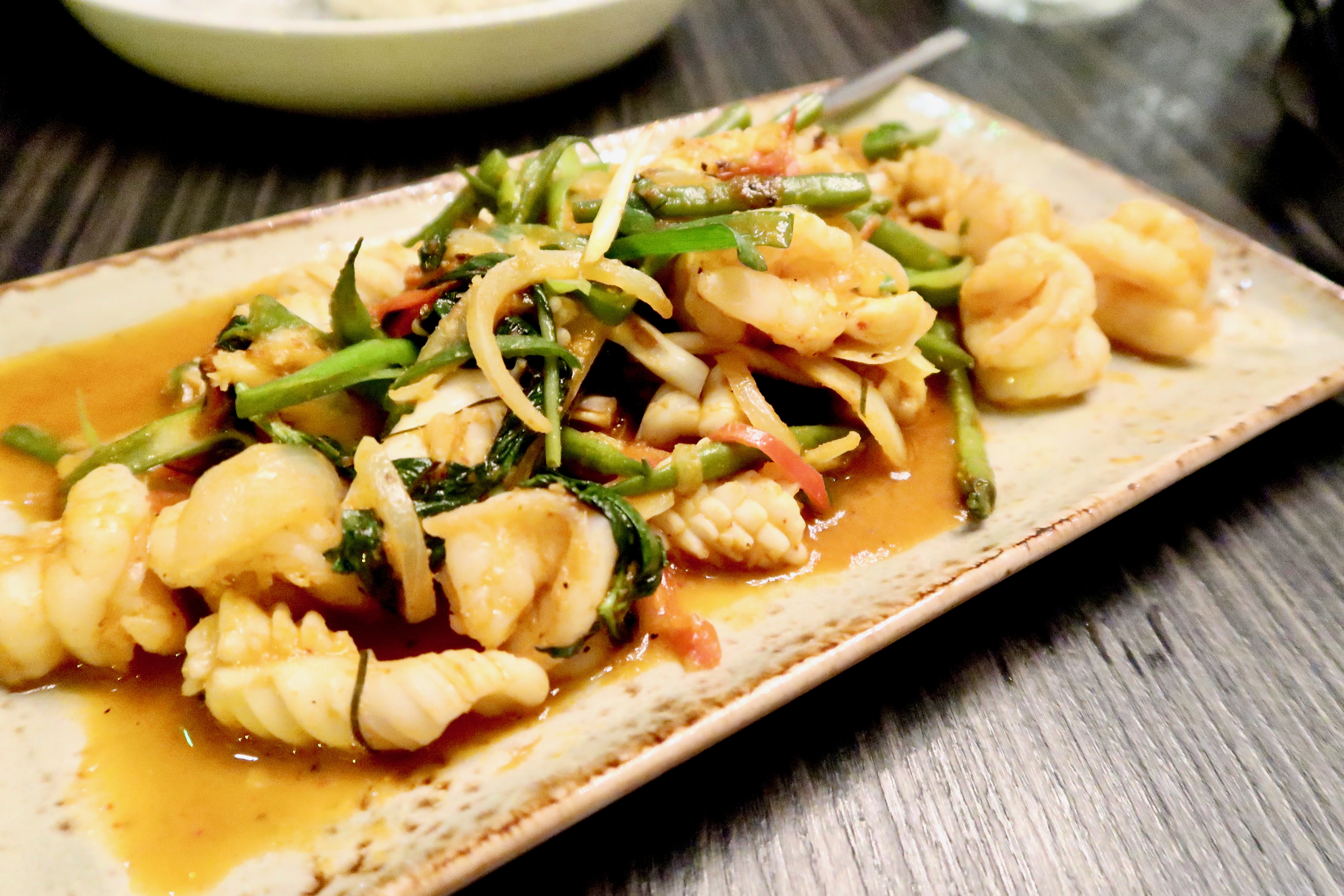 Cast your mind back to last Summer and my visit to SoHe in Jesmond. The Asian fusion restaurant and cocktail lounge situated on the ever bustling and well known Osbourne Road. Newcastle boasts over 450 restaurants within a 5-mile radius of SoHe, so there’s plenty of choices to dine whatever cuisine you fancy.

With the addition of the new twist ‘Parichat at SoHe,’ I was invited along to check out their new menu last week. Designed and created by Priachat, who you may recognise from the Thai-inspired Ko-Sai. Which was formally located in Fenwick’s Food Hall. A sous chef to Terry Laybourne for over 17 years, Parichat has become well respected within the Newcastle hospitality trade.

Bringing over her team, they’ve now made SoHe their residence.

We were greeted with arrival drinks, I ordered the Collins, around the table was a Geisha Girl Martini (£6.95) amongst other cocktails including an Amaretto and Blueberry Mojito (£7.25). We were then taken to our table, a large, round table in the bay window, perfect for a group gathering.

Then, we were presented with the expansive menu. From pre-starters to starters, Parichat at SoHe offers a varied menu with a large seafood focus. In addition to the a la carte menu, we were also supplied with their promo menu which includes a main and a drink for £9.95 (including a cocktail, wine or beer), which I personally thought was exceptionally great value for money. Finally, the fixed price menu was offered for our perusal. Both their promotional menu and fixed price change on a weekly basis.

After some confusion with the starters, with the waitress, who I don’t know if it was her general persona or just her Eastern-European tone (I suspect it was her general persona) but I’ll give her the benefit of the doubt because English wasn’t her first language. 3 Oysters (£4.80 per 2), a plate of prawn crackers (£3.50) and a bowl of edamame beans (£3.50) were brought to the table. Of which, we had ordered only the oysters.

Apparently these substituted 3 starters, so consequently shared the Chicken Satay Skewers (£8.95) between the five of us. The waitress, after being rather abrupt with the whole table, also brought out 2 Vegetable Spring Rolls (£6.95). Halved over for us to share. The Chicken Satay was nice and the chicken was tender with a sauce that wasn’t too nutty. I quite enjoyed this starter, however, the presentation was a lot to be desired.

I do admit, there appears more meat per skewer, however, there’s a vast difference in terms of how it was presented compared to when I last visited.

With our starters finished, we waited a while for our very frosty waitress to clear our plates. Our mains were then served. Alexis, Laura and I opted for the Halibut. I often talk about if you had to pick your ‘death row’ meal and could only have something one last time what would it be. Mine without a doubt would be Halibut. It’s my favourite fish ever so whenever it’s on a menu anywhere, I always order it. This was served with their Thai red curry and coconut rice.

Katie had opted for the chilli prawns and squid and Zoe, the Teriyaki salmon (£19.60), which was served with coconut rice.

In all fairness, the Thai red curry was delicious. It was quite mild and very flavoursome and went well with the coconut rice. My halibut, however, was a letdown. The three of us all agreed it was quite dry and was served lukewarm. All of us particularly commenting on the dryness of the fish. Which was slightly disappointing considering the halibut is priced at £21.95 for the dish.

Zoe’s salmon looked lovely and she said the piece of fish was exceptionally tasty and filling, however, remarked the Teriyaki was a little too salty for her taste.

With Katie ordering chilli prawns and squid her plate arrived full. It looked absolutely delicious and left me wishing I had ordered this dish from their set price menu. The squid looked sensational and the prawns meaty. It was fiery hot and served with the coconut rice to cool it down. This was undoubtedly the best choice of the evening.

To end the evening Alexis chose the Panna Cotta for her dessert. A large portion was served topped with pomegranate, kiwi and mango to round off the Asian fusion evening. Enjoying the final course, she did, however, comment that it was a little runny.

Unfortunately, we visited an evening where Parichat wasn’t in the kitchen and I feel had she been there our food would have been fantastic, instead, I personally thought that it was just average. That’s the thing when the head chef is in the kitchen, everything is created with passion. This was evident when Paul Amer cooked for us at Marco Pierre White’s or Terry Laybourne at Porterhouse.

The interior decor in SoHe is utterly beautiful and the cocktails are exceptional. I think the drink and main for £9.95 is a great deal. However, with a plethora of other restaurants nearby, I personally wouldn’t put it in my Top 10 restaurants in Newcastle. Saying that if you head to my review from my previous visit you’ll see it was completely different. I hope this was just a one-off and that Parichat at SoHe can really become the destination restaurant to go to in Jesmond.