The Alchemist: Newcastle – Believe the hype? 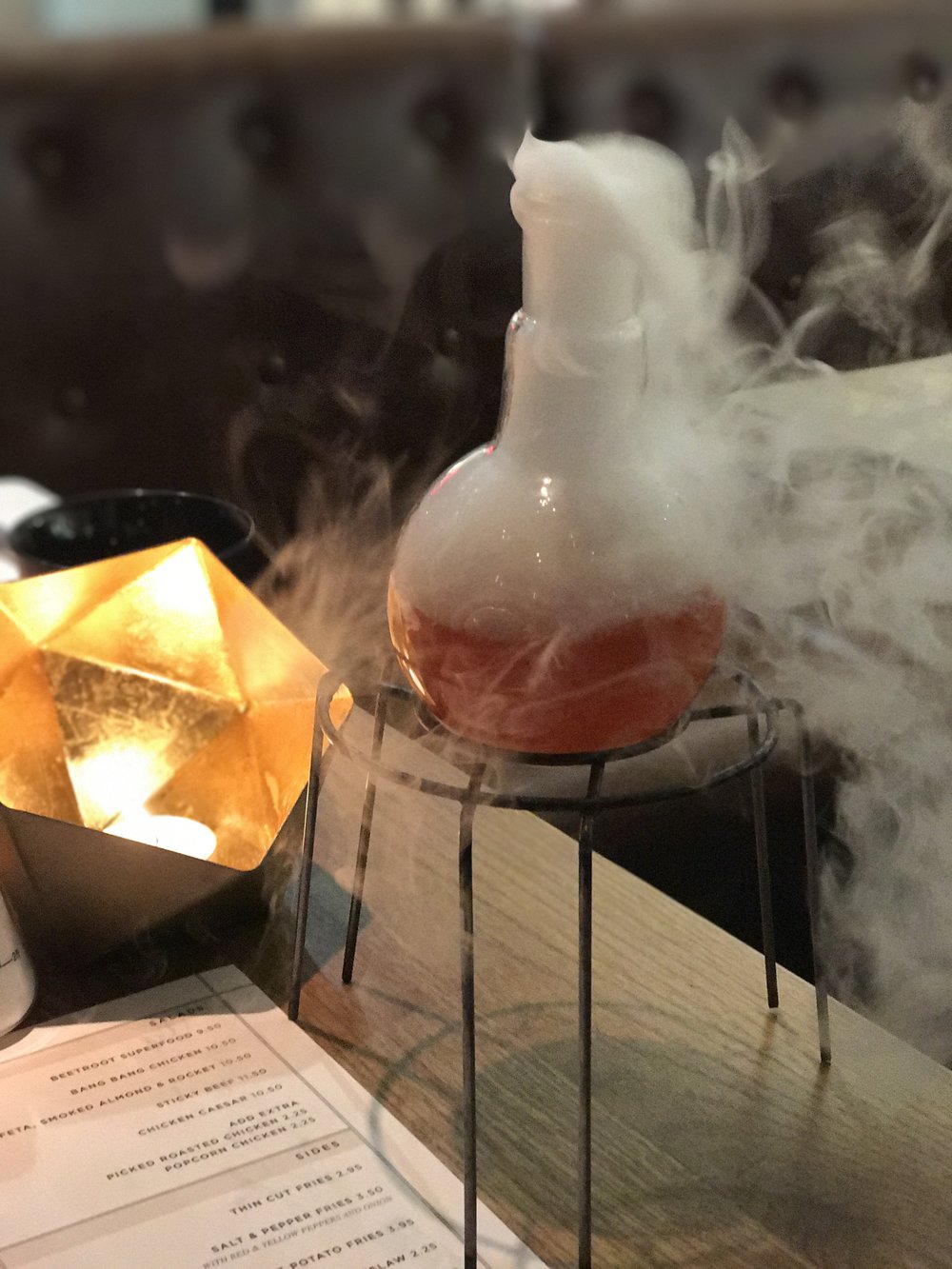 The Greys Quarter, located in intu Eldon Square is home to a plethora of brand new eateries from Spanish Tapas to Thai fine dining. There are lots of different cuisines to choose from and it really is becoming a destination hub for the hungry revellers of Newcastle.

So, The Alchemist is the newest restaurant to open after a huge press campaign including multiple launch nights I knew I had to go along to try it out.

In three simple words, I’ll probably sum my evening up to you. What a disappointment.

You see while reading blog posts and seeing all these hyped up posts plastered all across social media I genuinely thought we’d be in for an amazing evening.

This is the thing! Seeing all these posts from people I know raving about The Alchemist (not to be confused with The Botanist across the road which is fabulous) I believed them. I believed the hype and now it’s left me a little deflated and questioning their integrity (more about that later). As to have they posted a glowing review to keep in with the PR company who organised the launch to get invited to more of their events? After my experience, I certainly think that’s the case.

Anyway, you came to read about The Alchemist in Newcastle didn’t you?

Arriving a little later than we had booked due to traffic (we did phone ahead) my Mum and I were warmly greeted by the lovely girl from the front of house team where we were then taken through the restaurant to our table.

Never judge a book by its cover

Soaking up the surroundings and the attention to detail we were suitably impressed. From the salt and pepper in small chemistry flasks. To the tea light holders on the table which embodied the branding of this now nine bar chain.

We began to peruse the cocktail menu. With a bounty of choice and a periodic table style menu I asked our server, Ethan for a cocktail that smoked and looked great. I wanted to take some fabulous photos of course! He recommended the Lightbulb Moment so I took up his recommendation. My mum opted for The Alchemist’s take on a Zombie, the Dead Red Zombie.

We waited a while for our drinks. However, we were in no hurry, so sat back and chatted. When our drinks eventually arrived I must admit they were extremely impressive. You agree right?

We ordered nachos to share. One of the easiest dishes to get right, but also the simple dish that seems to always be such a letdown!

What arrived was 8 CRISPS. I kid you not, 8 of them with the tiniest picking of cheese and a thimble of salsa and guacamole. Presented on wilted cheap iceberg lettuce. I HATE iceberg lettuce, at least there was a borrower-sized dish of soured cream to match my soured mood.

8 nachos will set you back £4.95 and whilst reasonably priced for a city centre starter. I genuinely don’t think that this was value for money. In fact, it was exceptionally poor.

Food envy, or was it?

Whilst we were slowly eating our 4 nachos each we observed the diners around us. With fajitas the most popular choice and an impressive looking skillet which offered a choice of meats, (vegetarian option available). This looked like it would be a fantastic and flavoursome meal. With these diners looking pleased with their choice upon being presented with a tortilla warmer to discover only 2 tortillas smaller than tea saucers inside their faces quickly changed.

We were glad we had ordered burgers. Or were we?

We ordered another round of drinks, I opted for the Aviator, mum the Black Jack cocktail.

Shortly after our nacho plate had been cleared our main course arrived. The side plate in which our burgers were served on was symbolic of the whole restaurant. It was all an illusion. Serving food on small plates to make it look bigger is one of the most undesirable traits a restaurant can display.

I had opted for the burger with chilli extra. My mum opted to add cheese. As the burgers fly solo on this small plate we ordered a side of chips and coleslaw to share.

Well presented the burger was served on a brioche bun. With a gherkin ‘flag’ and a thimble-sized amount of relish. Which in all fairness wouldn’t be missed as it was neither here nor there?

We dished up our chips between us, these and the coleslaw were the only things that arrived which were ample to share. Although admittedly the chips were lukewarm. I don’t know about you but I prefer my food hot?

Cutting my burger in half to attempt to pick it up it all just disintegrated into a sloppy mush so I resorted to using my knife and fork. As I began my first mouthful our second cocktails came.

Distracted momentarily by the syringe in the Black Jack and the hip flask that came with my Aviator. Which I later found out was priced at £12.50!!!!! Whaaaaaaat?! I mean you get to keep the hip flask and when you return you get 50% off that specific cocktail. Great. Just what I’ve been wanting…

We began to eat our meals after checking out the cocktails. The Black Jack comes recommended if you do happen to visit and is extremely strong.

While tasting my burger I looked at my mum and she knew by my expression I wasn’t best pleased.

The ‘patties’ were no thicker than a McDonald’s burger and to be honest. Brutally honest I think I’d have enjoyed a double cheeseburger for a fraction of the price better at McDonald’s.

My mum wasn’t struck by her burger at all either. And whilst we understand that this new restaurant, like all new restaurants. They have their initial teething problems, sub-standard food shouldn’t be one of them.

Whilst we were dining we saw some people we knew, they voiced similar opinions for their Alchemist experience too. Stating that whilst the showmanship at the bar is a great novelty for the first few minutes. They thought it took far too long to be served drinks and they too thought the food was extremely disappointing.

Feeling disheartened by our experience we opted not to have pudding and make our way early along to the launch of Billy Bootleggers. The speakeasy across from the back doors of The Alchemist.

How much for whaaat?

With our total bill coming to just under £70 for 4 cocktails. A nacho starter and two burgers with two sides we thought that this was expensive for substandard food and average drinks.

Whilst we see the initial novelty factor of the smoking dry ice, alchemy style props in drinks and little quirks. We both feel that this new addition to Newcastle is extremely overhyped and our experience was nothing more than smoke and mirrors.

With hundreds of dining choices in Newcastle, unfortunately, The Alchemist you consequently haven’t made it on our recommendations list.

Have you been yet? We’d love to know your thoughts!