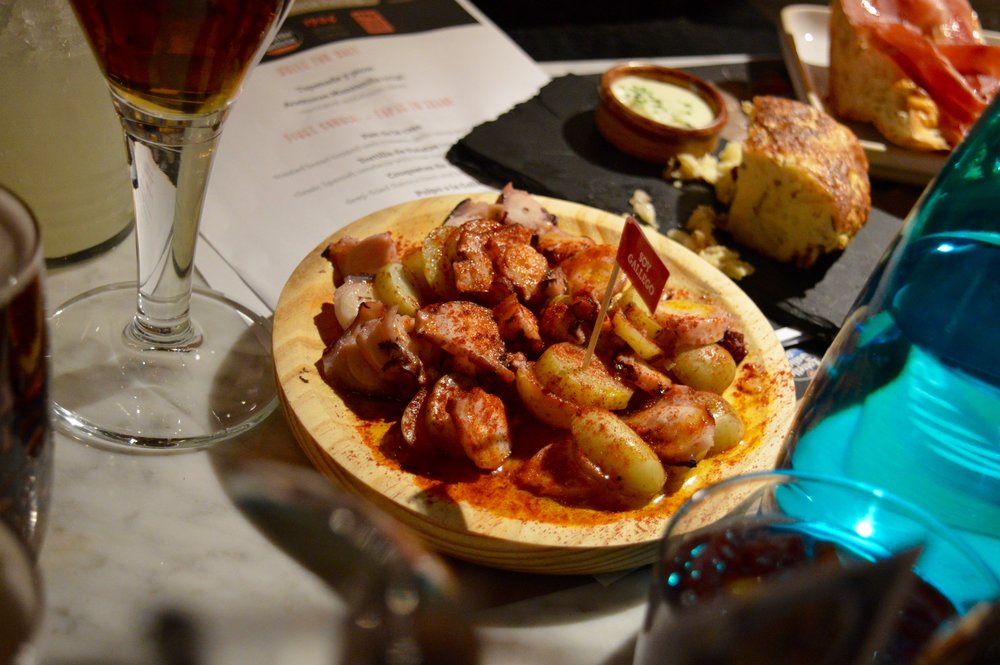 First of all, if you’ve been keeping up I’ve recently returned from Tenerife where I visited Aqualand & Siam Park with my cousins. Even when the weather was rubbish we headed to see if we could complete the Canary Escape Game. So when I arrived at a very cold Manchester Airport the week before last you can imagine just how I felt after a week in the sunshine. That was until I checked my mailbox and saw an invite to the Estrella Galicia beer pairing evening at the newly opened Tapas Revolution in the Greys Quarter of Eldon Square.

Now if you’ve never heard of Tapas Revolution before it’s the brainchild of celebrity chef Omar Allibhoy. Who has, as a result, been dubbed the ‘Antonio Banderas’ of the food world by none other than Gordon Ramsay. With most notably having fed royalty and Hollywood celebrities he’s on a mission to revolutionise the Spanish food scene. For that reason, Newcastle is his next stop.

With 5 other restaurants under his belt. This skilled culinary chef is passionate about Tapas Revolution bringing something different to the table and not becoming another chain. Which upon entering the rustic, traditionally Spanish looking restaurant you can see is apparent.

Originally from Madrid, Omar has been treating the UK to his skills for the last 11 years and because of this, his vision of bringing a bustling tapas restaurant to Newcastle has paid off.

Arriving at Tapas Revolution with my gorgeous lady and the North East’s Fashion Queen, none other than Fashion Voyeur, Pixie. We were certainly greeted with an extremely warm welcome by the maître d’ of the restaurant. Who showed us to the high table in the centre of the restaurant with 10 seats around it.

As we took a seat at the end of the table next to a host of other familiar faces from the North East influencer scene we began to peruse the drinks menu. Opting for a cocktail both Pixie and I chose the Ginger & Chili Cobbler. It arrived in a tall glass garnished with a slice of ginger, an excellent choice for wetting our appetites. This mix of tequila was fruity and fresh and prepared us for beer tasting.

With Spanish olives and tapenade, a plenty we chatted between ourselves before the first three of the Estrella Galicia beers were brought out. The first, a light 0.0% alcohol-free number which was perfect for pairing with bread. For that reason, light food such as the Tortilla which was served as part of the tapas starter. This light but delicious Spanish delicacy was the best tortilla I’ve ever tasted. Served with a garlic aioli, I’m not just saying that either. After a couple of shared tortilla’s in Tenerife with my cousin. I can now class myself as a little bit of a tortilla expert?

Consequently, this beer also worked really well to compliment the Octopus with sliced potatoes and paprika. Octopus is one of those dishes that I really enjoy, but only seem to have a couple of times a year. Maybe as you can never seem to find great quality fresh dishes. With Omar explaining that all ingredients are sourced and imported freshly from Spain to keep the authentic flavours.

There’s no wonder this was perhaps my favourite dish of all of the starters. I love watching people eating Octopus for the first time. Especially when they’re grossed out with the tentacles. Seems like it’s great as a conversation starter between friends as they gather to share tapas and a great time.

Similarly, the atmosphere at Tapas Revolution is extremely vibrant and is full of Spanish spirit. With a fantastic fiesta-style atmosphere it really is a great place for meeting with friends or somewhere to go on a date to share food.

The second beer, a slightly darker mix and offering 6% volume was a little more full-bodied and was great paired with the crusty, freshly baked bread. With lashings of chilli butter and topped with Serrano ham. Which had been freshly sliced before serving. It was amazing to learn from the Estrella Galicia team that the richer the food the better it is paired with a darker more fuller bodied beer. The second beer of the three served with the food was a richer smoother beer and extremely quaffable.

If you’re heading to Tapas Revolution you must order the croquettes. They are to die for. The smoothest creamiest mash is encased in the most delicious breadcrumbs. They were served piping hot and were absolutely delicious. They were perfect teamed with the second beer, the 4.7% best-selling Estrella Galicia Lager.

Once we had laughed over tapas starters we were served one of Omar’s speciality dishes and something I was really looking forward to, Paella. This chicken and rice dish was served between four and was absolutely huge. I’d normally opt for a seafood paella and usually would never give chicken paella a look in. But this worked extremely well. The rice was perfectly cooked. The chicken and sauce were the perfect combinations and I seriously can’t recommend this dish enough.

When I return I certainly will be opting for this dish. I paired this chicken paella with the third beer a 6.5% 1906 Reserva Especial. Which was a little more full-bodied and really complimented the dish perfectly.

Before heading to Tapas Revolution I had never thought about beer pairing. However, having three different beers served over the course of the tapas and paella it really got me thinking about choosing the perfect beer to compliment your meal. Think of it like red wine for meat and white for fish. The lighter the beer the better it is paired with lighter dishes.

For the final course, Omar treats us to a Spanish twist on bread and butter pudding. This brioche bun, soaked in custard was devilishly sweet, paired with a stout looking Estrella. The 1906 Black Coupage which was actually a dark beer and not a stout. With a chocolate, sweet flavour this was a pudding made in heaven for somebody with a sweet tooth.

As we finished up our desserts and beers we chatted a little more to Omar who is so passionate about creating a bustling hub for great quality nationality food in Newcastle and headed home. As we left Pixie and I spotted their breakfast menu and instantly looked at each other as we both knew what the other was thinking…..see you for breakfast, Omar!

Omar’s book Spanish Made Simple is available now to purchase and honestly, if you can recreate his recipe half as great as his then you’re onto a winner! 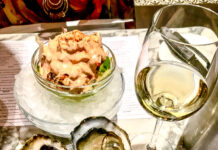 The Top Cooking Rules You Need to Live By 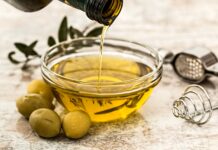 7 Must-Have Ingredients You Should Always Keep in Stock 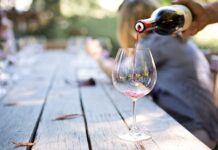 How my Mother of All is getting on with her Mother...

Elle Blonde - August 18, 2016 0
So a big passion of mine in life is nutrition. As a sufferer of a gluten intolerance, I’ve done endless reading and...